About three out of every 1,000 babies in the U.S. are born with hearing loss. Left untreated, this can have devastating effects on speech and language development and, in turn, on academic performance later in life. Research on owls may help improve early diagnosis and intervention options. 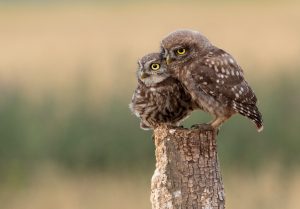 While this program has helped countless children across the U.S. develop their speech-language skills alongside their normal-hearing peers, the system isn’t perfect, largely because traditional hearing tests aren’t designed for babies.

According to pediatric audiologist Kristy Knight, “One of the things that we really struggle [with] young children is knowing, can they recognize the difference between sounds like ‘else’ versus ‘elf’, for example? Our regular hearing tests don’t tell us that. We have to wait till the child has some amount of language development to really measure that clinically.”

How Research on Owls Can Help

About 20 years ago, Avinash Bala, a neuroscientist at the University of Oregon, worked on a research project aiming to condition barn owls to respond to various sounds and study how they hear in order to better understand how humans process sound. While the conditioning effort was ineffective, Bala made an important discovery: owls’ eyes dilate in response to new sound stimuli.

Bala is still unsure why this phenomenon occurs. He hypothesizes it may be a biproduct of how organisms have evolved to orient themselves within the world, or that it allows the animals to hone in on a specific object that catches their attention, like a predator or prey.

He had a realization much more important than why this response occurs, however: “What I realized was that we could also use this in people who are unable to respond for one reason or another. And the biggest such group of people is infants, because babies can’t tell us what they’re thinking.”

Looking to the Future

Bala and Knight, who works at OHSU Doernbecher Children’s Hospital, are partnering together to develop pupil-response testing that will provide audiologists with another tool for diagnosing infant hearing loss.

“What we’re proposing is that if we have a test that doesn’t require expertise, any audiologists can administrate,” Bala said. “What it involves essentially is putting a baby in his mother’s lap or in a high chair playing sounds… and at the end of 15 minutes, the computer just comes that gives you up yes or no answer.”

The team hopes to produce a prototype of the test sometime this fall.