Approximately 15 percent of adults are affected by tinnitus, a term that describes ringing, hissing, buzzing, whistling or roaring sounds in the ears with no external sound source. Tinnitus is different for everybody, as it can be constant or intermittent and range from a minor nuisance to a debilitating experience. Research shows that people with tinnitus are much more likely to have hearing loss than those without.

How Many People with Tinnitus Also Have Hearing Loss? 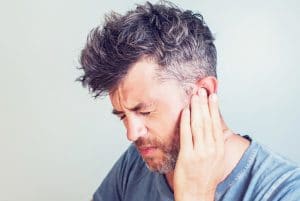 Why Do Hearing Loss and Tinnitus Correlate with One Another?

In order to understand how hearing loss and tinnitus correlate with one another, it’s important to know how sound travels through the ear.

How Sound Travels Through the Ear

Sounds travel through the air in the form of soundwaves. The outer ear – the part that is visible – funnels these soundwaves into the ear canal and on to the eardrum.

The eardrum, which is the border between the outer and middle ear, converts the soundwaves into vibrations, which travel to three tiny bones called the malleus, incus and stapes. These bones amplify the sound vibrations and send them to the inner ear.

Within the inner ear is a snail-shaped structure called the cochlea, which is filled with fluid. The sound vibrations create waves in this fluid, which cause tiny hair cells called cilia to bend. This process converts the vibrations into electrical signals.

The electrical signals then travel via the auditory nerve to the brain, where they are interpreted as sounds that you can recognize and understand.

When the Ear Over-Compensates

Illness, injury, aging and noise exposure can damage the cilia within the inner ear, causing hearing loss. When this happens, the auditory system compensates by becoming extra sensitive so sounds can be heard more easily. This can lead to tinnitus and also sound sensitivity.

For more information about the connection between tinnitus and hearing loss, call the experts at Pinnacle ENT Associates today.