People with hearing loss in Coatesville have a higher risk of danger in emergency situations, according to the Hearing Loss Association of America.

Good hearing is crucial in alerting you to safety hazards, such as fires. 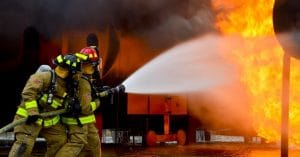 It’s many peoples’ worst nightmare: waking up to the smell of smoke and finding your house on fire. But what if you never woke up?

If you’re one of the 48 million Americans with hearing loss, that is a distinct possibility.

Because hearing loss usually affects high frequencies first, the majority of hearing-impaired individuals have difficulty hearing high-pitched sounds, such as those emitted by conventional smoke detectors.

The Fire Protection Research Foundation (FPRF), a nonprofit organization that compiles data on fire and building safety, wanted to know how many people who perished in fires suffered from hearing loss. Data was sketchy as few investigations into fire fatalities take into consideration the hearing abilities of victims.

The group published its findings in a 2007 study called Waking Effectiveness of Alarms for Adults Who Are Hard of Hearing. The results showed that 43 percent of research subjects failed to awaken to the high-pitched signals generated by smoke detectors.

Alternative alarms such as visually-based strobe lights were even less effective, waking only 27 percent of participants.

Based on this date, the FPRF concluded that the best way to ensure the safety of individuals with mild to moderately severe hearing loss is through the use of smoke alarms that produce low-pitched tones averaging 520 Hz, as opposed to conventional detectors that emit sounds in the 3,150 Hz range.

While properly-maintained smoke alarms that detect the presence of smoke and produce an audible alarm are attributed to a 50 percent drop in fire-related deaths in the last 30 years, they simply aren’t loud enough to awaken people with hearing loss in Coatesville.

Terry Portis, Executive Director of the Hearing Loss Association of America, is convinced that the FPRF study demonstrates the need for a major overhaul in the country’s emergency systems so they are better able to prevent injury and save lives.

Still, individuals with hearing loss can take steps to prevent themselves from becoming fire statistics.

The Americans with Disabilities Act (ADA) requires that all public facilities with sleeping accommodations provide hearing-impaired guests with access to their buildings’ alarm systems; many offer alternative warning devices, as well.

When booking a room, make sure to inquire about your available options.