The air is turning crisp, leaves are changing color, and stores are stocked with pumpkin spice-flavored everything. This can mean only one thing: Halloween is right around the corner! If you’ve noticed teal-colored pumpkins on front porches while canvassing the neighborhood, don’t worry – you haven’t stepped into a time machine and been deposited back in the year 1993. The blue pumpkins actually serve a special purpose.

What’s with All the Teal Pumpkins? 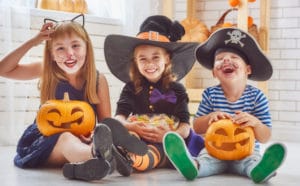 The Teal Pumpkin Project, created in 2012, is the brainchild of a Tennessee woman who wanted children with food allergies to be able to enjoy Halloween. A non-profit advocacy group known as FARE (Food Allergy Research & Education) helped promote the idea two years later through a viral Facebook post, and it has quickly become an annual tradition.

Parents in West Chester and nationwide who wish to participate by offering non-food treats for ghosts, goblins, and witches can place a teal pumpkin on their doorstep; this lets trick-or-treaters know that non-food items are available. Instead of candy, you can offer items such as glow sticks and Halloween stickers. You can still pass out Milky Way bars, of course; the point is to have an alternative for those who might be allergic to chocolate, peanuts, or other food items traditionally associated with Halloween.

Wondering where to find a teal pumpkin? FARE has licensed a lineup of Teal Pumpkin Project products available for sale at many of the nation’s largest retailers, including CVS, Michael’s, and Party City. Items such as foam pumpkins, painting kits, and more can be purchased for a reasonable fee.

Roughly one-third of parents report adverse food reactions in young children at some point; statistics show that verifiable food allergies occur in five to ten percent of children, reaching their peak around the age of one. That’s an estimated six million children with either a food sensitivity or allergy.

The most common food allergens are peanuts and milk. Other frequent triggers include eggs, fish, shellfish, soy, tree nuts, and wheat. Some children may outgrow their allergies, but for others, ingesting the food can cause serious adverse reactions, including a potentially life-threatening reaction called anaphylaxis. Allergy symptoms can include breathing difficulties, wheezing, coughing, hoarseness, throat tightness, a drop in blood pressure, and shock; this may lead to a coma and even death. Most children with food allergies must carry an Epi-pen with them at all times in case of accidental ingestion.

Since the primary treatment for food allergies is avoidance, allergy testing to determine exactly what your child should avoid is key.

You can help children with food allergies in your neighborhood enjoy Halloween by participating in the Teal Pumpkin Project. For more information, follow this link!